and become the first among compretitors

and we will call you back

It’s hard to find a person who hasn’t seen the “Sovtransavto” logo. A blue letter “S” against the white background in the form of two arrows running towards each other has been a symbol of reliability, quality and permanent professional competence for many years in a row. This unique system has become not only the forebear of international transportations in Russia, but also an important part of our country’s history.

“Sovtransavto-Moskva” OJSC is one of the biggest international transport and logistics enterprises. Its history is a constant process of development and improvement which began 70 years ago. 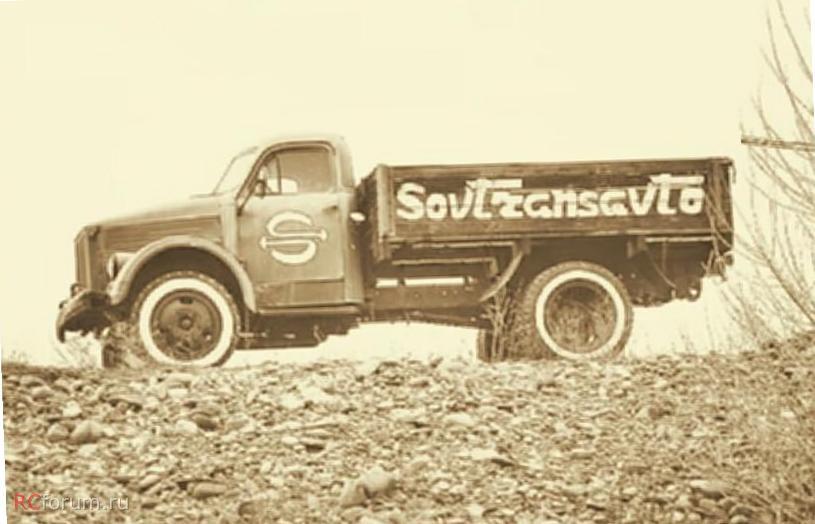 In 1963 the USSR Government ordered the Ministry of Motor Transport of the RSFSR to arrange regular freight transportation by motor transport within international traffic. This was the task imposed on the Kuntsevo auto-transport enterprise. The motor vehicle column got under the jurisdiction of “Glavmezhavtotrans” and by Order No.181 of the Ministry of Motor Vehicles and Motorways of the RSFSR started to carry out regular centralized interregional and inter-republic freight transportations. Later it was rearranged as “Kuntsevo motor transport establishment of the intercity traffic”.

The 12th of August 1963 saw a landmark event in the history of the enterprise. Drivers A.A. Efimov and A.Ya. Volchkov, driving road-trains made up of tractor trucks MAZ-200 M – MOM 74-39, MAZ-200 M – MOM-74-46 and semitrailer cars MO-72-37 and MO-72-41, started for the city of Warsaw of the People’s Republic of Poland for transporting the freight of organization “Knigoeksport”. That was the trip which marked the starting point of international transportations in our country, and the drivers, who performed the trip, can be justly known to be heroes and trailblazers on European routes. 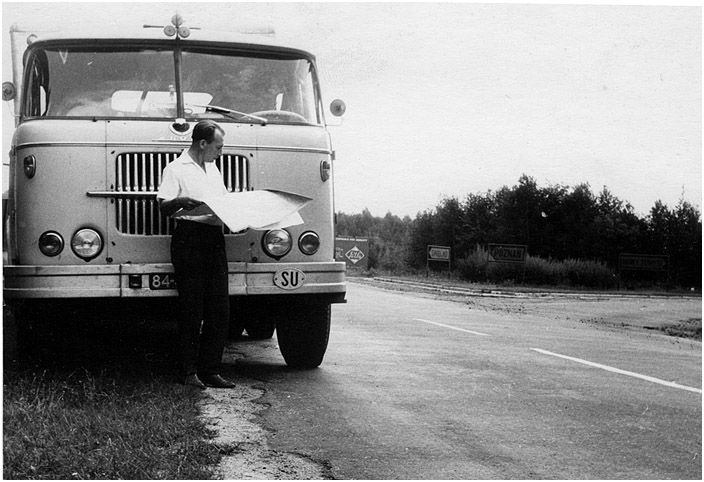 In the following years the number of international trips increased rapidly, and the geography of transportations expanded. Trips to Czechoslovakia, Bulgaria, Germany and other countries began to be arranged. The main customer at that time appeared to be foreign trade association “Soyuzvneshtrans”.

Establishment of the “Sovtransavto” system

As foreign economic relations developed, the necessity of arranging the far-reaching international motor transportations in the country became apparent. In this connection the autumn of 1968 saw issuing of a special decree of the Soviet Union government on establishment of the Main Directorate of the international motor service which was named “Sovtransavto”.

One of the first enterprises included in the “Sovtransavto” system was the “Kuntsevo motor transport establishment of the intercity traffic”, thereafter it was renamed as “Motor transport enterprise for the international transportation ‘Sovavto-Moskva’”” by the order of the Ministry of Motor Vehicles and Motorways.

In 1970 the position of the director of “Sovavto-Moskva” went to Vladimir Mikhailovich Zolin. Initially he went through major efforts coming in grips with the West-European transport market by establishing contacts with many freight forwarding companies from foreign countries. 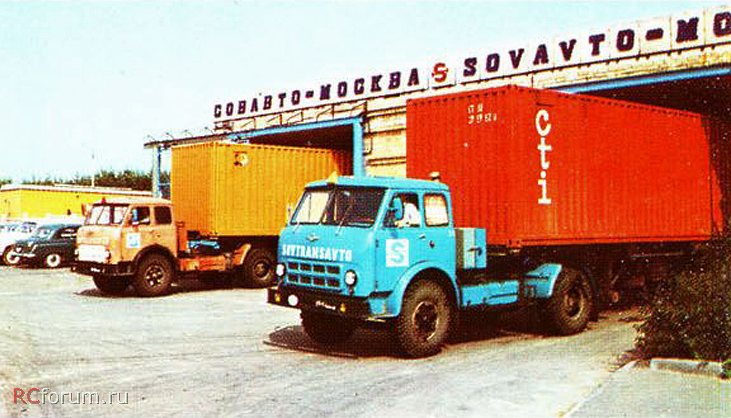 After all the legal questions had been settled, new difficulties emerged on the way of formation of the new branch. First of all, this was the subject to the technological infrastructure of the truck fleet. The rolling stock comprised few units, the conditions of centralized planned economics forced the production of native car industry to be registered in advance for months and years ahead. In order to solve this difficult situation the direction of “Sovtransavto” had to try to ask the State Planning Committee to register the delivery of freight vehicles for the established Directorate in the budget separately. Since 1973 the truck fleet of the enterprise has been completed with vehicles of West-European production: Volvo and Mercedes.

In this period the “Sovavto-Moskva” enterprise under Zolin’s direction saw a real technical revolution. The workshops were equipped with utilities, new machine tool stations were purchased, a technical class was organized, where experts could share experience. Working conditions for employees were also actively improved.

In 1976 V. Zolin passed the directorship to the chief engineer of the enterprise Mikhail Kudinov who headed “Sovavto-Moskva” during 25 years of follow-up. Just like his predecessor, Kudinov continued the work on creation of a unified, powerful and, most significantly, efficient transport structure. Owing to his coherent professional actions, the transportation volumes increased every year, and the quality of the rendered services improved continuously. 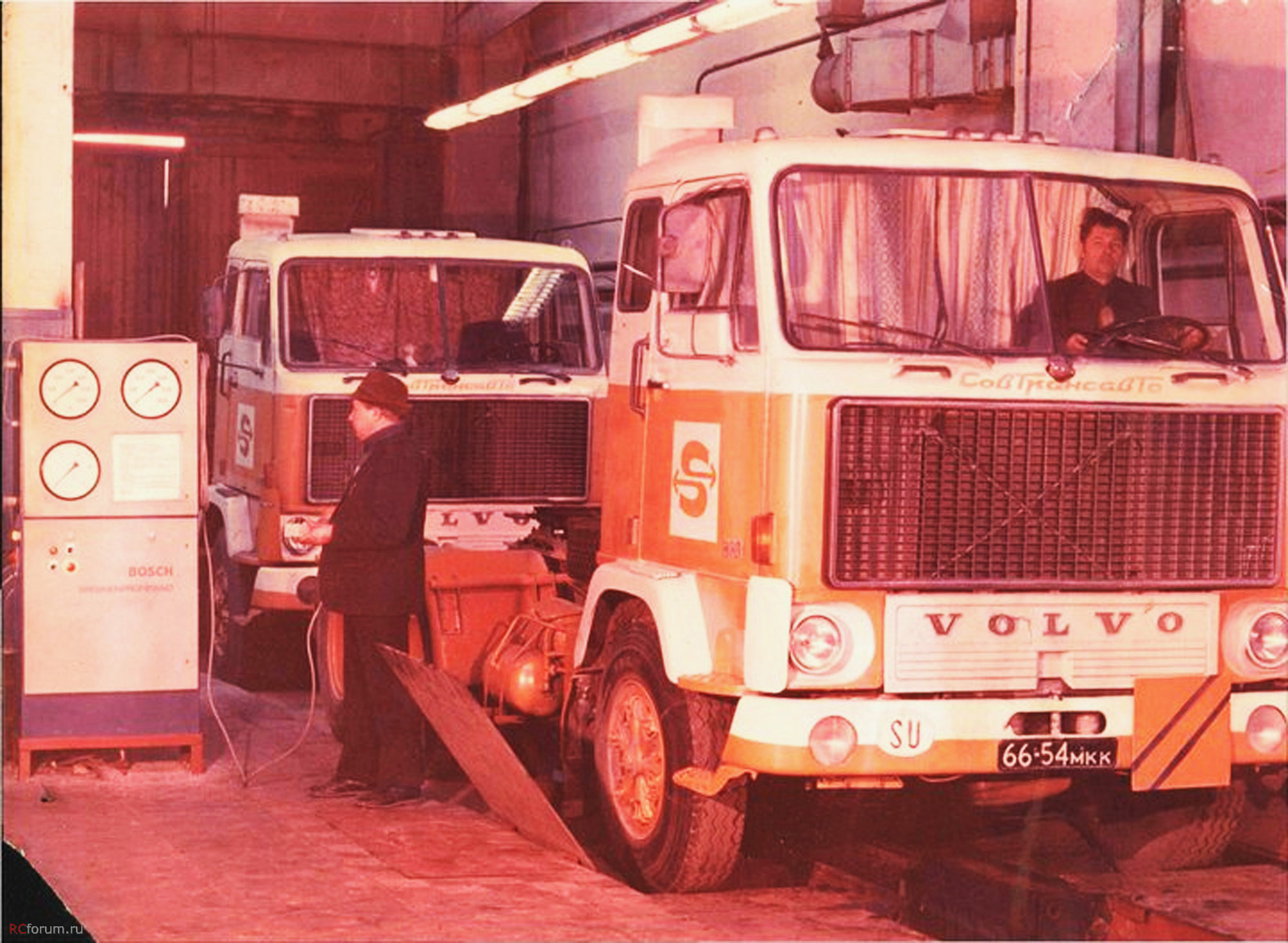 By that time the transport market had already developed in European countries. But it was rather problematic to reach, considering that the Soviet Union had been isolated from the capitalistic part of the world for a long time. Owing to a very strong support on the part of the state alone, the enterprise managed to enter the international markets, thus making a worthy competition for foreign carriers.

On the wave of success

The peak of the most successful and profitable work of the Soviet “Sovtransavto”, spread literally all around the world, falls on the middle of the eighties. In those years the enterprise had three and a half thousand freight vehicles, including ones of foreign origin (Mercedes-Benz, Volvo), and about fifteen thousand employees and workers. Geography of transportations expanded constantly, by that time covering the whole Western Europe, Scandinavia, and Turkey, Iran, Afghanistan, Mongolia in the east.

The state allocated significant funds for equipping the production areas of the enterprise with new technological facilities. This led to constant improvement of the services rendered, and the “Sovtransavto” system maintained the adequate level of competition with western carriers.

From the very beginning the leading personnel of “Sovtransavto-Moskva” has paid a great attention to establishment of the personnel. The most reliable drivers were then chosen to work at the international routes, and they were much influenced by the necessary propaganda. It was almost impossible to obtain employment at “Sovtransavto” without solid experience and recommendations at that time.

International drivers were trained very seriously. For this task the enterprise arranged permanent training courses covering the questions of vehicle driving and safety, study of customs regulations, requirements to the movement of export-import goods, foreign languages. Corresponding phrasebooks were developed for the drivers. The program also included the studies of special aspects of a particular country’s driving regulations. 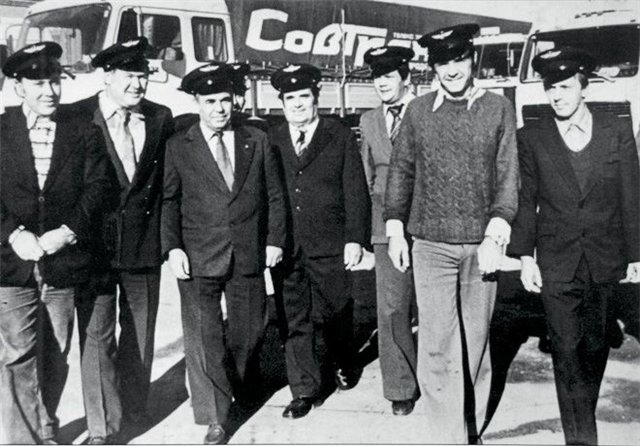 After completion of a training course the authorized representatives of the General Directorate of “Sovtransavto” arranged regular examinations of the work of the drivers setting out on international trips.

Everything was analyzed, starting from technical and economic characteristics of the transport means, and ending with the drivers’ behavior on the road. If a driver didn’t pass the examination in some aspects, he had to take a training course once again and only then could drive abroad.

Owing to such a careful training, the executives of “Sovtransavto-Moskva” established a body of high-level drivers, real experts in solving any questions connected to freight transportation.

With the beginning of perestroika, market reformations and dissolution of the USSR the branch ministry stopped exercising economic functions; the processes of corporatization and voucher privatization started. The hardships that our country faced at that difficult time affected motor transportation entirely as well.

Those were the times of trials and falls for “Sovtransavto”. The worldwide famous system went through a whole range of rearrangements. Thus, in 1988 the basic administration of ”Sovtransavto” was transformed into a foreign trade association upon the terms of full-scale economic responsibility and self-financing. In 1990 the association became a foreign economic concern, and two years later acquired a status of a closed joint-stock company. The former “Sovavto-Moskva” was merged into “Sovtransavto-Moskva” OJSC. 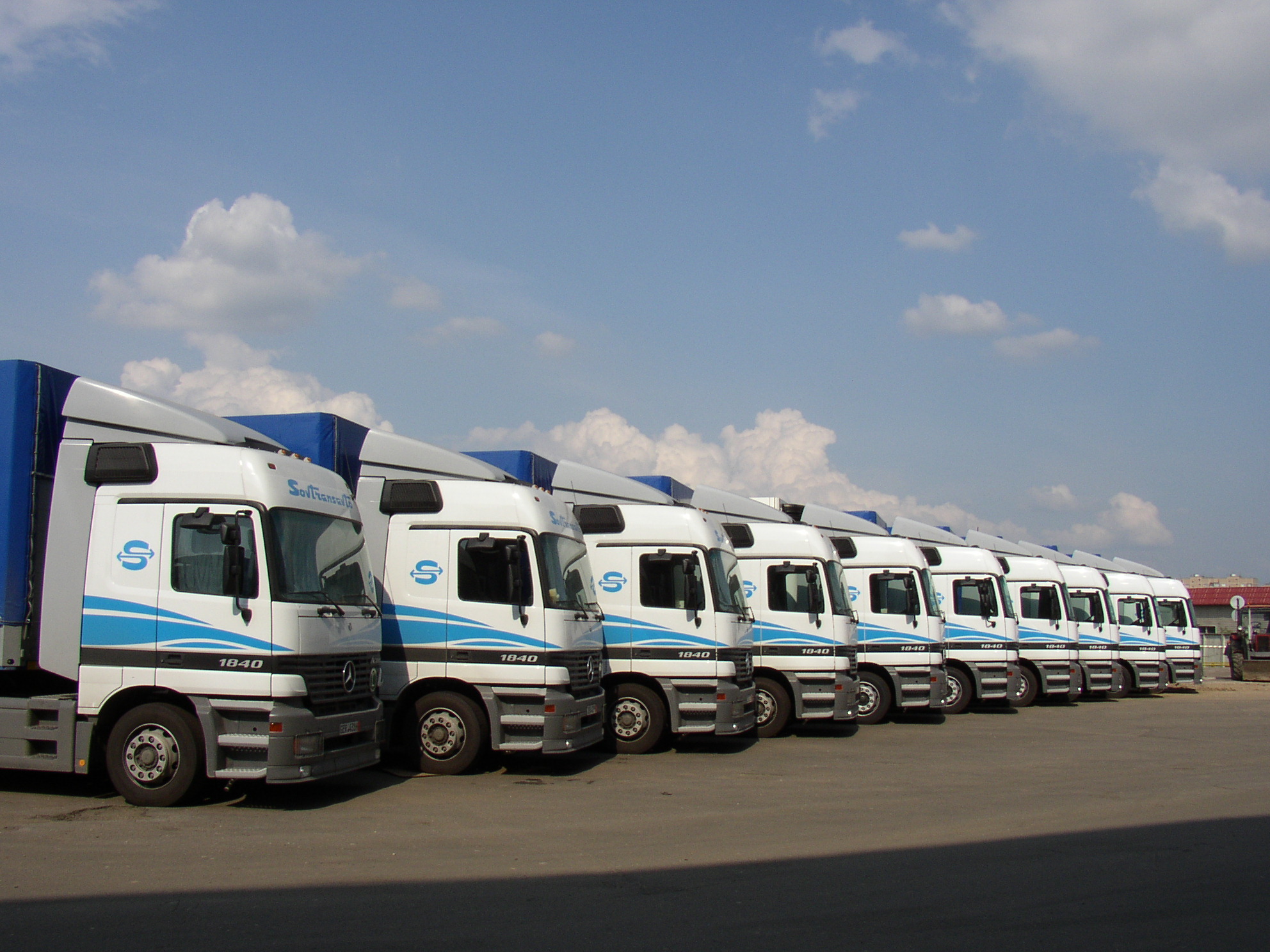 The established business environment and the rapidly increasing competition at the market prompted the executives of the enterprise to make a decision to readjust the Company’s work. Thus, in 1995 “Sovtransavto-Moskva” OJSC began implementing new activity types and entered the market with a proposal of services in customs registration of the export-import freights. In 2000 a temporary storage warehouse was built at the territory of the enterprise, and in 2001 it got a status of a base warehouse with customs registration.

All the measures assumed by the leading personnel at that complicated time worked towards maintenance of the famous brand, and also ensured sustainable activity of the Company.

Establishment of “RUSTA” Group of Companies

In 2004 the position of Chairman of Board of Directors of “Sovtransavto” Holding CJSC was shifted to Dvoynykh Alexey Viktorovich, thus making a turning point in the Company’s history.

The situation was rather complicated in those years. New conditions emerged, market relations evolved, the legal system changed. It was impossible to develop the renew company only on the basis of the former company. Therefore the executives of “Sovtransavto” tried to use the lessons learned to the full completing them with things that were much-in-demand at the modern market.

In order to work efficiently in a competitive environment, the Company expanded the range of the provided services and renewed the vehicle fleet entirely. Young human resources were drawn to the management, and they did a great work in financial rehabilitation of the Company in close interaction with the experienced employees.

The following step on the path of development was a new project of “Sovtransavto-Moskva”, implemented in conjunction with Belorussian enterprise “Westavto” – the establishment of “RUSTA” Managing Company.

Developing rapidly, the Group of Companies began to open a vast network of branch offices in many regions of Russia, gradually acquiring the status of one of the biggest holding enterprises that provided freight transportation services in the territory of Russia and the former CIS countries.

Equally high standards of the provided services at all the branches, promptness of service and of information presentation – all these factors became a calling card of “RUSTA” Group of Companies distinguishing it from other enterprises. These factors are responsible for earning confidence of such major customers as: Aeroflot, Michelin, Ehrmann, Adidas, Gazprom Tsentrremont, Ikea, Icopal, TheCoca-ColaCompany.

2011 marked the beginning of a new chapter in the life of the enterprise. By this time the long-term experience of successful work and the lessons learned had allowed the executives of the Company making a decision of further independent development. A group of shareholders led by Dvoynykh A.V. exchanged its owned shares at the Holding for the shares of enterprises “Sovtransavto-Moskva” OJSC and “Westavto” OJSC, discovering the possibility of a more serious concentration upon managing the new project – “RUSTA” Group of Companies. And the result of their work wasn’t too long in coming.

In 2011 3.5 thousand m2 of office and warehousing premises were put into service, and the rolling stock was increased by 20%. In addition to the 40 present branch offices the “Rusta-Broker” Company opened three branches more in Novosibirsk, Kazan and Birobidzhan, and the “RustaLogistic” Company became a member of AIAC (Association of International Automobile Carriers) and Freight Forwarders Association of the Russian Federation.

The year 2012 was also eventful for the “Sovtransavto-Moskva” Company:

March 2012 – Chairman of Board of Directors of “Sovtransavto-Moskva” OJSC and “RUSTA” Managing Company Dvoynykh Alexey Viktorovich was elected to the composition of the Council of Carriers of AIAC of the city of Moscow by the Central Federal District.

July 2012 – Preliminary round of the IX Open All-Russian Contest in mastership of drivers of line-haul trains “AIAC-Profi 2012” was carried out in Smolensk. In the course of difficult competition the “Sovtransavto-Moskva” drivers’ team showed the best results and took the premier place at the contest. 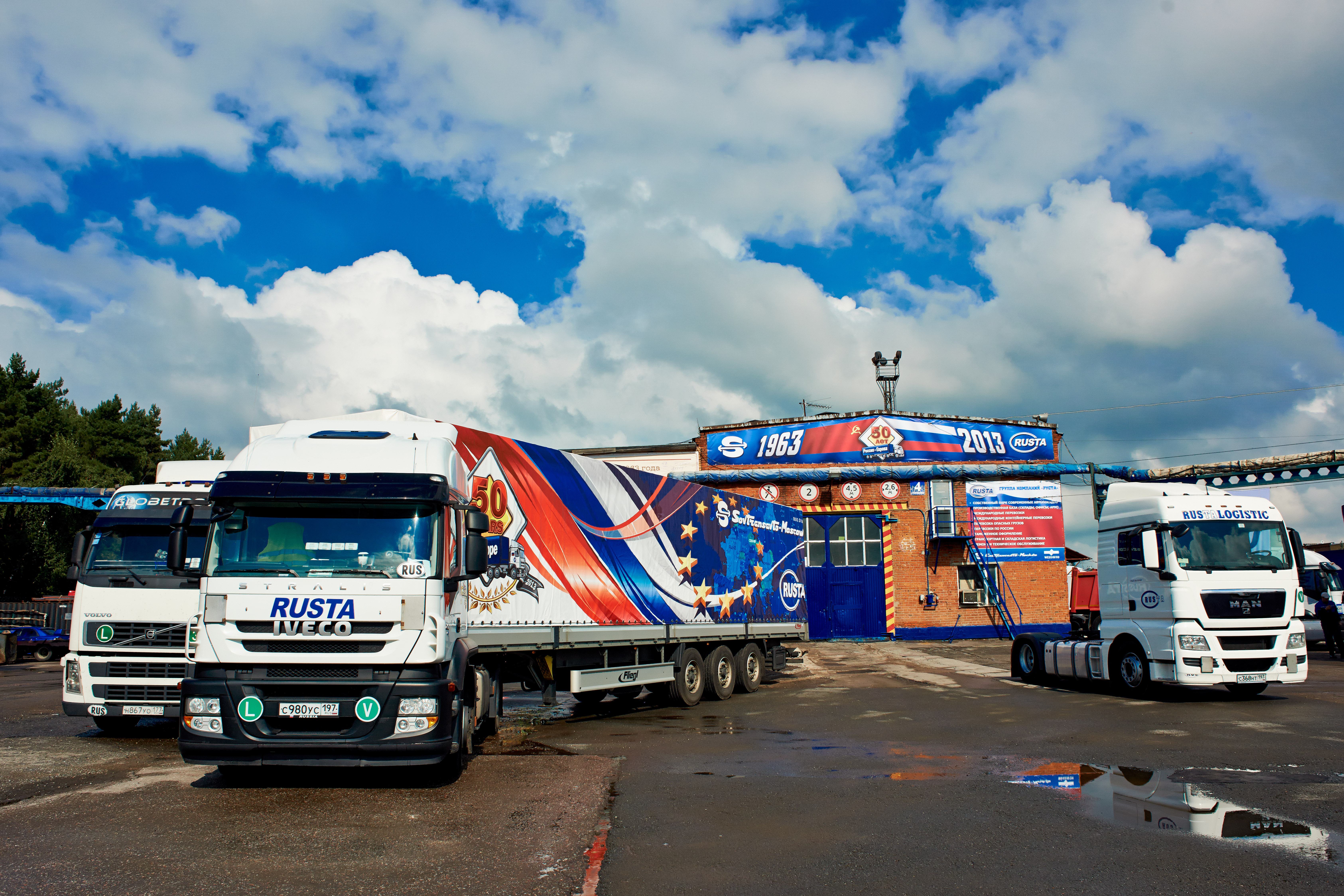 Furthermore this year “Sovtransavto-Moskva” became the general transporter of the APEC Summit (city of Vladivostok, Russky Island) and regarding the results of work in 2012 it was acknowledged as Recipient of International Public Award “Zolotaya Kolesnitsa” in the category: “Leader of international motor transportation”.

Since 2013 the position of Director General of “Sovtransavto-Moskva” OJSC has been filled by Burago Sergey Vladimirovich who previously worked in the capacity of Deputy Director General.

In May 2014 Alexey Viktorovich Dvoynykh headed the Council of International Carriers of Moscow Region.

This year our Company celebrates a landmark event – its 70th anniversary! Over the last years the “Sovtransavto-Moskva” Company withstood not only the test of time but also the test of crisis conditions in the country. Hundreds of routes were discovered, thousands of kilometers were covered, and millions of tons of freight were transported. This impressive experience is the key to infallible and professional activity that turns any transportation into a successful business.